Skip to content
Posted on October 12, 2019
Spread the love

The past has got a lot to teach us when it comes to space planning in office environments.

As we move into a new generation of office environments, designed to meet the needs of all, we can expect an eclectic mix of corporate space that takes the best from past design to provide a large selection of the most varied and effective uses of office space.

The efficiency of the silent generation

Before the end of the Second World War, an engineer from the U.S called Frederick Taylor began designing some of the best expanses of office space that demonstrated efficiency and order. The offices were spread over a large single floor with rows of evenly spaced workstations for the collective mass of workers, with a small office set aside for managers. The workspace was designed for efficiency, filling the room with as many people as possible so that every square foot was accountable.

Working in the cluster

The 1950s saw the introduction of the cluster environment; areas compartmentalized by the department. Introduced and influenced by German designers, the spaces were designed from a more advanced perspective and considered to be more of a ‘landscape’ than simply a room full of people. The office of the fifties had desks grouped together to make it easier for co-workers to communicate and provided a much less rigid structure. During the mid 20th century, furniture design was revolutionised with designs coming to the fore that are still popular today, such as the Eames Office Chair, available from https://www.pash-classics.com/office/chairs/ 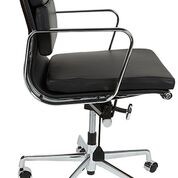 The mid-60s to mid-70s saw the dawn of the action-packed office. In this new age of communication and telephony, the need for quiet and calm was paramount and thus was born the cubicle culture. Portable walls, sloping to form workstations and, basically, to protect from excess noise, this office lent itself to a more personal style of work, which supported greater focus, together with the making of calls.

In the 80s and into the ’90s, the era of cubicles gains further traction, with workstations often supported by a fourth wall to allow for extra privacy with limited spaces filled with a large desk and a computer.

Birth of ‘web’ and other new technologies

As the ’90s progressed so does technology. Internet and digital innovation has seriously changed the way we work, making the world smaller and allows for far greater, and faster, interaction than ever before.

New technologies have an impact on physical office space. Computers shrink, the walls come down and open plan becomes the norm. Laptops allow flexible working methods such as hot desking to become the norm.

There is most definitely a lot to learn from previous trends in office design. We can lift the best parts from each generation and use them to help us in the future, this is a list of factors we can see: efficient space planning; cluster environments, with less rigidity; a quiet area for concentration and retaining essential privacy; the latest technology; simple style and creation of easy flow.